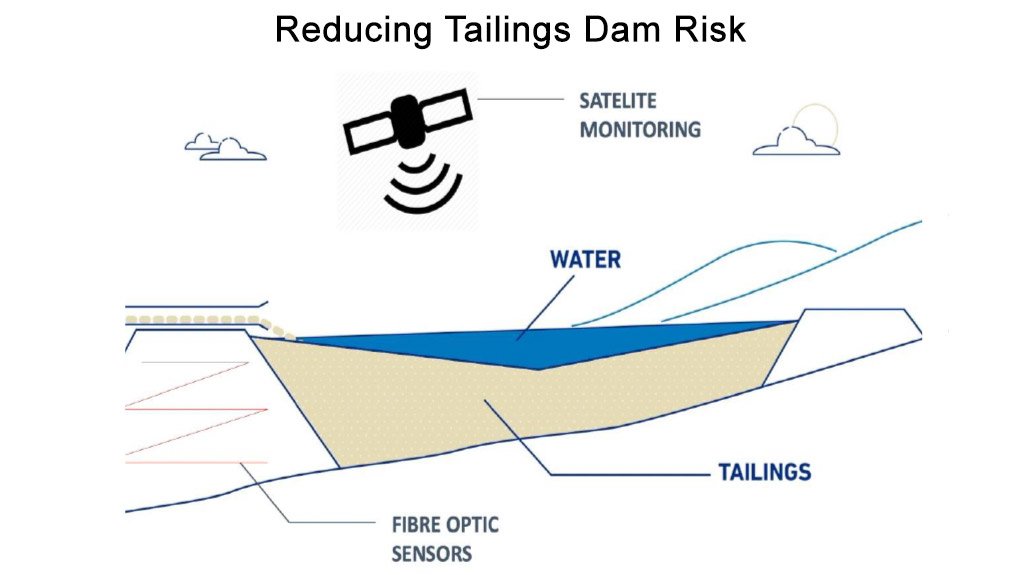 JOHANNESBURG (miningweekly.com) – Diversified mining company Anglo American is implementing new techniques that give the company far more control over tailings dams, which have been thrown into the spotlight after the tragic loss of life at Brumadinho, in Brazil, where an iron-ore tailings dam collapsed at Vale’s Corrego do Feijao mine earlier this year killing hundreds of people.

The London- and Johannesburg-listed company has developed a new technique that provides information on the amount of water in its tailings dams and fibre-optic installations at some of its tailings storage facilities provide real-time monitoring of strain, deformation and seepage.

“Nobody else in the industry is doing this,” Anglo American technical director Tony O’Neill disclosed during Wednesday’s sustainability presentation, covered by Creamer Media’s Mining Weekly Online.

At the Quellaveco copper mine in Peru, Anglo is introducing micro-seismic monitoring of tailings dam foundations, which checks on geological and structural features in the dams and their foundations.

While these initiatives provide the company with a high level of assurance, Anglo’s ultimate aim is to eliminate tailings dams altogether.

Against that background, it has done a lot of work on coarse particle flotation and engineering design that will be implemented at its El Soldado copper mine in Chile next year and hopefully also at Quellaveco, where Mitsubishi is a co-owner.

The company has also developed polymer systems that clean up water quicker and allow for the coagulation of the coarse particles into even larger coarser particles.

It has had a lot of success with that and is now starting to implement an initial pilot plant. The aim is to create particle sizes of around 250 microns to 300 microns, with water naturally releasing out of the tailings dams.

“Our ultimate aim is to take that into dry stacking but, as we sit here today, that technology isn’t practicable for operations at scale. That’s something that we’re working on,” he said.

The company is also working on a step change in capital intensity and footprint equation, with coarse particle flotation reducing water consumption by 30%, and energy by 30%, and increasing output by 30%.

Bulk sorting is poised to increase head grade by 5% to 7%. New crushers being developed with a group in Germany provide a 10% energy reduction. “We’ve made tremendous progress in the last 12 months. Our first bulk sorter is now operating in Chile. We’ve got another two imminent for Brazil and South Africa. The early signs are very promising on that work and they’ve been enabled by a new generation of sensors and we think that these sensors, as they combine with artificial intelligence, will give us a whole range of new applications,” he said.

A number of crushers have been destroyed in the development process. “We haven’t quite got that one right. But the signs are that we’ll get there and these will replace, in many instances, some of these really large energy consuming SAG mills,” O’Neill divulged.

He described the most exciting area as that of novel leach, new chemistry that could deal with issues at legacy tailings dams.

Overall, Anglo is advancing human-centred operation to its absolute limit through its P101 programme, before entering into the realm of autonomous operation.

“We’ve made some tremendous progress in the last 12 months. We’ve seen productivity in some of our key processes doubling. But, at its essence, it’s about reliability and predictability,” O’Neill added